We have a Viessmann Vitodens 200w boiler and the screen on the weather compensating control unit (Vitotronic 200 Weather Comp Kit HO1) is stuck with everything lit up. 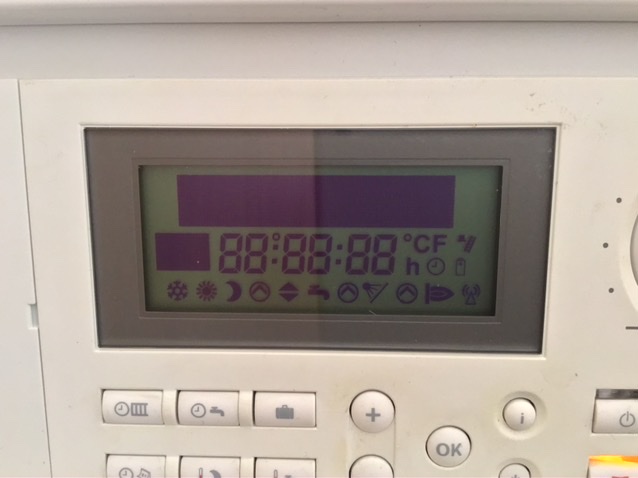 I can’t find anything in the manual about why this is, no combinations of buttons have helped, and the old off and on again trick does not fix it. The manufacturers help line won’t deal with me because the boiler is out of warranty and I’m not a licensed plumber.

Update based on comments. Pulling the fuse / circuit breaker, and indeed a local area power cut affecting 400 houses turned the boiler off, but when it came back on it was still the same. We can't be 100% sure why it wen like this, but my father in law thinks he pressed the briefcase and plus buttons at the same time and entered a test mode. But I can't find any mention of it.

Update 2 We've had various issues with the Boiler, with parts being replaced. Its had a new mainboard, new pump and new valve, but the control panel worked fine since those were installed. The Boiler is doing hot water fine, heating to radiators is underwhelming, but waiting on a pipe service, I think that is unrelated? Pressure in boiler seems fine.

How can I get it back to normal operation?

Are you looking for the answer?
Original Question and Possible Answers can be found on `http://diy.stackexchange.com`
Question Tags: boiler, central-heating, plumbing