How much does it cost to land on a lunar mascon?

This answer to Delta-v for landing on the moon estimates that to go from a circular orbit at 110km to a landing on a spherical Moon would require an absolute minimum of 1736 m/s and the Apollo landers budgeted about 20% more for more realistic landings.

25 m/s is used to change the circular orbit into an elliptical orbit which intersects the surface, and the rest at the last moments in a "suicide burn" to reduce velocity to zero on touchdown.

Suppose I wanted to land on top of the most challenging lunar mass concentration or mascon. Over time, mascons have brought spacecraft crashing into the Moon because their locally higher gravity fields perturbs their orbits, making them more eccentric until they intercept the surface. Their effect is a little bit like small, inward-pointing radial impulses discussed in this answer. 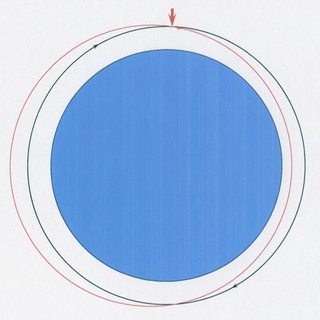 Question: It it possible to roughly estimate based on the sizes and strengths of lunar mascons what the delta-v penalty would be for safely landing on, or just past (downrange) of the biggest lunar mascon? Would it for example require an additional 1 or 10 or 100 m/s to counteract the higher local gravity?

fyi: I've just asked How can I make a Python function return the Moon's gravitational force in a form I can use to calculate orbits? in Earth Science SE, if there's anything helpful I'll update here.

I also wonder if there is a faulty premise in my question. Could a carefully choreographed orbit use several passes (over time) to use the mascon in a constructive way to do some of the work of that 25 m/s transfer to the surface-intersecting elliptical orbit? Would it in fact require less delta-v than to land elsewhere somehow?

The Bouguer anomaly plots show elevated gravity as much as about 600 mGal. Wikipedia's Gal (unit) explains what this means; 0.6 Gal is 0.006 m/s^2 or almost a half of a percent of the Moon's average gravity, and they extend over quite large distances.

The gal (symbol: Gal), sometimes called galileo after Galileo Galilei, is a unit of acceleration used extensively in the science of gravimetry. The gal is defined as 1 centimeter per second squared (1 cm/s2). The milligal (mGal) and microgal (µGal) are respectively one thousandth and one millionth of a gal.

Are you looking for the answer?
Original Question and Possible Answers can be found on `http://space.stackexchange.com`
Question Tags: gravity, mascon, orbital-mechanics, the-moon